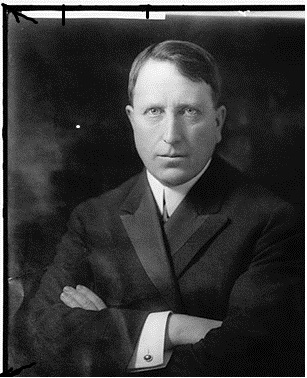 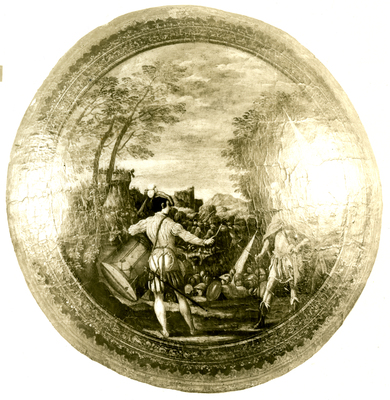 "Convex and circular, made of wood covered with painted canvas; the subject is the siege of a fortified town. In the foreground, a condottiere, in antique armor and a red cloak is giving orders to his men whom he has posted behind a thicket, and upon whose action he relies for victory. Before him a young drummer, in fashionable slashed costume, is watching his leader with drumsticks raised, awaiting the order to sound this charge. In the middle distance, behind this group, a storming column, hidden behind a trench, are marching past. In the background, to the left the ramparts of the town covered with defenders, on the right, the main body of the besieging army already attacking. The whole is framed with foliations and arabesques painted in gold. We have been able to trace the history of this piece some distance back. In the first half of the XIXth century it belonged to the famous armour collection of Cavaliere Ambrogio Uboldo of Villareggio, nr. Milan. He actually opened the catalogue of his collection (published at Milan, 1841, and now almost impossible to procure) with the volume containing the shields. It is a folio volume and the shield in question is given by lithography in plate 7, No. B., besides being described in the printed (unpaginated) notice on this plate. At the Uboldo sale, the shield was acquired for the Spitzer collection, and on the occasion of the Spitzer sale it figured as No. 58 in the volume of plates, and was described on p. 18 of the text.